Real Port – only made in Portugal! 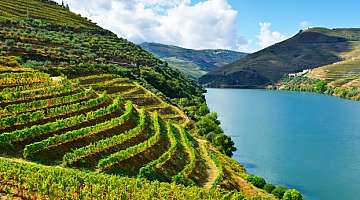 Port, named after the city of Oporto (Porto), is one of the beverages most associated with Christmastime.

In the UK quaint traditions like “pass the port”, with a decanter of port being passed around the table, have faded into the distant past, but the passion for the sweet, fortified wine is still very much alive!

Port is actually a British phenomenon. Because Britain wasn’t suitable for growing grapes, they traditionally imported wine from France, but during the war with France in the 17th century, Britain boycotted French wine and looked elsewhere.

So, at that time, two wine merchants were exploring Portugal’s Douro Valley and they discovered a monastery where the abbot added grape spirit to his red wine early on in its fermentation to preserve its sweetness.

To help sustain and preserve their wines for the long sea voyage back to England, they decided to use this method of ‘fortification’ too. The wine takes its name from the city where these traders had their base: Porto, from where it is to this day shipped to the world.

Little has changed - Port is still produced in this way - by intentionally interrupting the fermentation of the grape must (or juice) by the addition of a clear grape spirit called ‘aguardente’, generally referred to as ‘brandy’. This preserves a large amount of the grapes’ natural sugars, thereby giving Port its characteristic sweetness and richness.

The only place in the world that can produce authentic Port is the mountainous Upper Douro Valley in Northern Portugal – in 1756 this became the world’s first officially demarcated wine region.

Ports have a reputation for being higher in alcohol, noticeably sweeter, with more body and palate density than other still wines. Fans of rich cheese and decadent desserts appreciate Ports pairing versatility.

There are up to 52 grape varieties used to make the four main styles - red, tawny, white, and rosé port not forgetting the premium category: late-bottled vintage (LBV) and crusted ports.