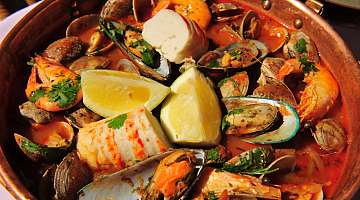 Lunchtime in the Algarve is perfumed with the aroma of freshly-caught sardines grilling over wood- fired barbecues. Every beach bar, however large or small, has grilled sardines on the menu, and the restaurants are filled with lunchtime diners enjoying the vast variety of fish that the Atlantic has to offer. On most menus there will be char-grilled swordfish, or tuna, together with sole, the bizarre-looking but delicious scabbard fish, or cod. Cod is one of the staples of the Portuguese diet, and there are reputedly 365 recipes for it in Portugal.

Some Portuguese dishes are much spicier than other Western European food, due to their colonisation of parts of the East Indies and the Far East. One of Portugal’s most famous specialities is piri-piri chicken, a spicy dish of chicken marinated in a hot chilli sauce made with piripiri peppers - a tiny, but searingly hot pepper which the Portuguese discovered in Brazil on one of their early explorations of South America. The Portuguese have become quite addicted to piri-piri sauce over the last four hundred years, and bottles of it are found on most Portuguese tables, and it is liberally applied to food in the same way as other countries use ketchup. Unlike Spain, the Portuguese do not indulge in a long afternoon siesta, so meals are taken earlier, with lunch being served from noon, and evening meals from seven pm.

For information on Property in Portugal, contact the Portugal Property team on 0800 014 8201 or email us on: info@portugalproperty.com