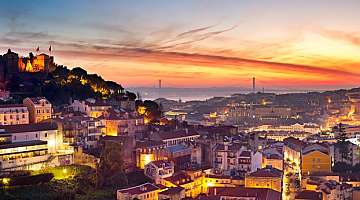 June is a glorious month and officially the start of summer celebrations. The Portuguese people give thanks to their three most popular saints - Saint Anthony, Saint John and Saint Peter.

Saint Anthony is the patron saint of Lisbon. The whole area is decorated with red and green bunting and parades with colourful characters in costume, folk music, and throngs of spectators enjoy the festivities until the early morning. Known as the ‘Matchmaker Saint’ Saint Anthony is renowned for a traditional mass wedding party! This started in 1958 as an initiative to help couples who wanted to marry but didn’t have the money to do so. Although this stopped for several years after the 1974 revolution, it eventually returned. Each year, sixteen Saint Anthony couples (noivos de Santo António) get married in the Lisbon Cathedral and their wedding is paid for by the Lisbon Council and private sponsors!

The Saint John festivities, dating back more than six centuries, are just as colourful and lively in Porto, but with different customs! The old tradition was for revellers to beat each other over the head with a leek, but now they use plastic hammers! Besides the firework display at midnight on the River Douro in the centre of Porto, colourful hot air balloons are released making it an amazing spectacle. For many, the night ends on the beach, to see the sunrise and for some to follow the tradition of taking an early morning dip!

Saint Peter – the patron saint of fishermen – is the saint with the most modest celebrations. Because all the feasts are linked to the summer solstice and ancient fertility rites, the traditions of jumping the bonfire and offering your partner pots of aromatic basil containing a four-line love note still continue!