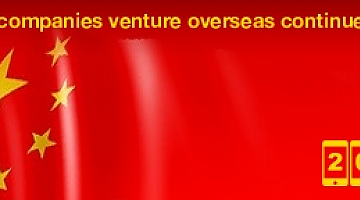 A recent study has ranked Portugal as the fourth most popular European investment destination for Chinese investors. The study quoted by The Portugal News revealed that the total Chinese foreign direct investment in Portugal reached two billion dollars in 2014.

The study was put together by Baker & McKenzie and it is titled Reaching New Heights. According to its findings, Chinese investment in European countries reached unprecedented levels in 2014. Chinese investors made 153 separate investments having a total value of 18 billion dollars. This volume has ranked Europe as one of the most popular destinations for Chinese companies interested in foreign investment opportunities.

Since the beginning of the century, several countries have managed to attract large amounts of Chinese investment. These top performers include the United Kingdom, Germany, France, Portugal, Italy, Holland, Hungary, Sweden, Spain and Belgium.

Most Chinese investors have so far shown interest solely in European countries that were relatively unaffected by the financial crisis. Recently, however, the Chinese companies started expressing more interested in other opportunities. The privatization of state-run logistics or utilities projects in Portugal, for example, has become a lucrative possibility that Chinese investors are looking into.

Several reports have taken a look at the manner in which Chinese investment has shaped up the Portuguese economy. According to Financial Times, Chinese investors have been one of the driving factors for Portugal’s economic success over the past few years.

The strategic location of the country is one of the main factors driving foreign direct investment up. Chinese investors see the opportunity as a solid chance for expanding across other markets like Brazil, Mozambique and Angola.

By the end of 2014, Chinese investment has accounted for nearly 45 percent of the successful Portuguese privatization deals.

The first big acquisitions by Chinese companies started back in 2011. Three Gorges Corporation was one of the biggest Chinese foreign investors and the company paid 2.7 billion euro to acquire 21 percent of the Energias de Portugal shares. Energias de Portugal is the country’s most important utility provider.

China’s State Grid is another notable investors. In 2011, only three months after the completion of the Energias de Portugal deal, the company acquired 25 percent of national grid operator Ren. The deal was valued at 1.4 billion euro.

These are not the only notable Chinese investments that the country has seen. In the end of 2014, the Wall Street Journal announced that China’s Haitong Securities will be acquiring the investment banking division of Banco Espirito Santo. The Portuguese lending institution had previously collapsed, which enables the Chinese company to easily acquire a network of offices in 16 countries like Brazil, Spain and Angola.

Portugal’s Golden Visa program also seems to be helping in terms of driving Chinese investment to the country. The program started in 2012 giving residency rights and problem-free travel opportunities to other European countries to the foreigners that invest at least one million euro in the country, create 10 workplaces or buy property valued at 500,000 euro or more.