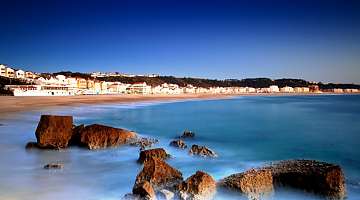 Briton Tom Butler, 29, believes he may have broken the world record for surfing the biggest wave ever after successfully riding a huge 100 feet tall swell at Nazaré on the Silver Coast of Portugal last month.

The fishing village of Nazaré is a giant wave spot which was created by a 16,000-foot deep underwater   canyon – its colossal waves are just perfect for extreme surfers. In fact, the waves swell to the size of large buildings! The deadly waters were originally considered too dangerous for local surfers until an American named Garrett McNamara couldn’t resist the pull of the monster waves. In 2011, he set a world record by riding a wave that measured at 78 feet. The record stood for seven years, until in May 2018, Brazilian Rodrigo Koxa surfed a wave that was officially measured at 80 feet.

Butler said surfing the wave was like 'running away from a raging bull'. But it is likely that he will have to wait for the World Surf League Big Wave Awards in April for official confirmation on whether he broke the world record.

Nazaré is the most popular destination of the Silver Coast and has been popular for many years. It has a long and wide sandy beach lined by bars, restaurants and shops. On top of Nazaré is ‘Sitio’ – where the original inhabitants established the village. This place must be seen – its square is surrounded by a magnificent church on one side and an outstanding view on the other – unless you are afraid of heights of course!

The Silver Coast is compared to the Algarve of twenty years ago and is now attracting a wealth of investment with leading developers and hotel operators such as Hilton, Campo Real and Marriot in the area. There are brand new shopping centres and international schools providing relocation options as well as supporting the holiday trade.

São Martinho do Porto, just ten minutes south of Nazaré, is quieter and geared up for younger families or those seeking beauty with peace and quiet. It has a unique horseshoe bay which is protected from the Atlantic allowing the bay’s waters to be warmer and gentler.

The whole coast has sandy beaches everywhere you look and is very popular with surfers! One of the other sporting options is golf with the resorts of Praia del Rey, just south of Nazaré and São Martinho do Porto.