The legend of the rooster of Barcelos 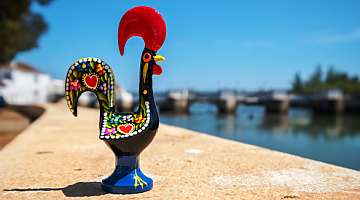 One of the most curious national symbols of Portugal is the ‘Galo de Barcelos’ (the rooster of Barcelos), usually represented by a colourful ceramic rooster decorated with hearts and flowers.

Legend has it that in 15th century Barcelos, in the North of Portugal, residents were upset by an unsolved crime so terrible that people were scared to leave their homes at night. An impoverished pilgrim had been passing through Barcelos on his way to Santiago de Compostela. Despite his explanation for being in Barcelos, he was still arrested and condemned to hang. He refused to go quietly and asked to be taken to the judge who sentenced him to death. The authorities granted his wish and brought him to the judge’s house while he was having a banquet with friends.

The pilgrim swore his innocence and pointed to a cooked rooster on the table. He claimed that the rooster would crow at the hour of his hanging as proof. The statement caused a large amount of laughter and mockery. The judge ignored him, but still set aside the rooster as he had lost his appetite. When the time for judgment came, the pilgrim went to the gallows to accept his punishment.

Right before the executioner could hang the pilgrim, the roasted rooster appeared and stood on the table in front of the crowd and crowed just as the pilgrim predicted. The judge realised the mistake he had made and rushed to save the pilgrim. The knot was not correctly tightened and he was able to easily be saved from his death sentence. Later, the pilgrim returned to Barcelos. He sculpted a cross in honour of the Virgin Mary and St. James, who he felt were responsible for saving him with the miracle of the rooster. Today, this cross is referred to as the Cross of the Lord of the Rooster and is still in existence in the Archaeological Museum of Barcelos.

The origin of this legend is varied since there are a large number of versions, however, the rooster has become the Portuguese symbol of wisdom, honesty and simplicity and is often known as the ‘good luck cock’.

Invest in Portugal and enjoy its heritage! Contact our friendly and knowledgeable team of Property Advisors by email info@PortugalProperty.com or call us on +351 308 800 878 or 0800 014 8201 free from the UK.