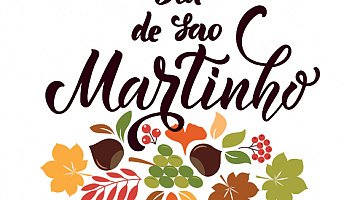 It is a religious holiday honouring Martin of Tours, a 4th-century Roman soldier who is known for a certain miracle.

Legend tells us that in the year 337, a very severe, cold Autumn took place right across Europe.

St. Martin was a Gallic Knight who became a Christian preacher and one day, he was returning home on horseback after a battle in the middle of a big storm.

On his way, he found a nearly naked beggar who asked for help. Martin had no money or food with him, but he was wearing a long cape which he cut in a half with his sword and gave half to the beggar to protect him from the cold.

According to the legend, right at this moment, the storm passed and the sun started to shine and Jesus said to the angels, “Here is Martin, the Roman soldier who is not baptized; he has clothed me.” Unbeknown to Martin, the beggar was Jesus. It was considered a miracle and the knight became a saint: Saint Martin - Sao Martinho.

Over the centuries, St. Martin's Day, in late Autumn, has evolved into a celebration of the harvest. In Portugal, Dia de São Martinho has become a day to celebrate the maturation of the year’s wine production.

In his honour, on 11th November, Portuguese families gather around bonfires roasting chestnuts known as ‘castanhas’ – and drink Jeropiga, a fortified wine, this is the day Saint Martin died and the celebration is called Magusto - believed to come from the Latin magnus ustus or ‘great fire’.

Throughout the winter season, you can buy chestnuts roasted on an open fire from street vendors, usually sold by the dozen and served in a paper cone.

Portugal is steeped in charming traditions – find out more about investing in Portugal. Contact our knowledgeable and professional team at Berkshire Hathaway HomeServices Portugal Property – part of one of the world’s most trusted and respected corporations. Telephone +351 308 800 878 or 0800 014 8201 free from the UK. Alternatively, email us at hello@PortugalProperty.com