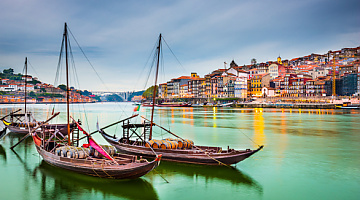 Considered the ‘Oscars of Tourism’, the World Travel Awards was established in 1993 to acknowledge, reward and celebrate excellence globally across all sectors of the tourism industry.

Today, the WTA brand is recognised as the ultimate hallmark of quality, with winners setting the benchmark to which all others aspire.

Votes for the awards are cast online by 200,000 travel industry professionals and the public from 160 countries, with the nominee gaining the most votes in a category named as the winner.

A UNESCO World Heritage city, Porto is not only known for the port which is shipped from here all over the world, but also for a heritage that combines ancient churches and monuments, such as the Cathedral and the Church of São Francisco and modern buildings, such as Casa da Música and the Serralves Museum. It is also famed for its School of Architecture which bred names such as Álvaro Siza Vieira and Eduardo Souto de Moura, both winners of the Pritzker Prize.

Find out more about investing in Portugal. Contact our knowledgeable and professional team of Property Advisors to discuss your requirements. Telephone 0800 014 8201 free from the UK or +351 308 800 878. Alternatively, email us - hello@PortugalProperty.com